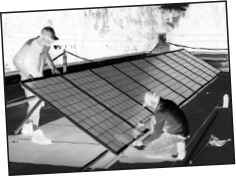 Installation of rooftop solar on the Musician's Hall
ACCOMPLISHMENTS
PUBLIC COMMENT HEAT AND SMOKE RULES
Leslie, Nicki, and Laurie submitted comment on behalf of CJPDX concerning OR OSHA's proposed heat and smoke rules.
LABOR SUPPORT LETTER
In January 2021 we authored a letter to Oregon state senators urging them to pass legislation to insure fair labor standards for solar and wind projects funded with state dollars.  We obtained signatures from  16 organizations.
LABOR 101 CLASS
We developed and delivered a three day Labor 101 class in coordination with Sunrise May 2020.  Day one was labor history and why unions are important; day two was interaction between four labor leaders and Sunrise; and day three was discussion of the Green New Deal, Just Transition and next steps.
LABOR LANGUAGE
We were instrumental in adding labor language to the City of Portland Climate Emergency Declaration in 2020.
PORTLAND CLEAN ENERGY FUND
We helped pass the Portland Clean Energy Fund in 2018.  The fund will receive revenue from a surcharge on gross receipts from major retailers in Portland.  The money will go toward renewable energy and weatherization projects and job training and union apprenticeship programs with a focus on low income and communities of color.
COMMUNITY SOLAR PROGRAM
We have been active with the Community Solar Program.  We are a member of the Community Solar consortia whose goal is to insure the Community Solar rules are equitable.   We spread the word to unions and other groups (e.g. schools, churches) about Community Solar.  We attended workshops facilitated by the Public Utility Commission who wrote the rules.  In a letter we sent to the commission we stated the following:

​JUST TRANSITION WORKSHOP
We helped organized a Just Transition Workshop in 2016 in coordination with the Center for Sustainable Economics
LABOR NETWORK FOR SUSTAINABILITY
We sponsored events for Joe Uehlein, Labor Network for Sustainability in 2015 and 2016
MUSICIANS HALL SOLAR INSTALLATION
a) We helped the Musician’s Hall install a10 KW roof top solar panel array through the Feed in Tariff Pilot (FIT) program August 2014. In partnership with the Musician’s Union and Synchro Solar, the solar contractor, we facilitated the FIT application process on behalf of the union. FIT is a program where the owner of the solar panels is paid for excess energy produced by the solar panels.
b) We organized the Musician’s Hall Solar Panel Installation Celebration August 2014.
ARTICLE CLUB
We facilitated article clubs (e.g. Bill McKibben’s “Do the Math” Rolling Stone Article and Naomi Klein’s “This Changes Everything” introductory chapter) 2013-2016