Climate Jobs PDX was started by Jobs with Justice activists who were concerned about climate change, the lack of living wage jobs and the tension between labor and environmentalists.

​WE ARE A PROJECT AS WELL AS A MEMBER ORGANIZATION OF JOBS WITH JUSTICE.

We meet the third Wednesday of the month at 5:30 PM. Join us!
​For the Zoom link, please contact markdariatpacifier.com 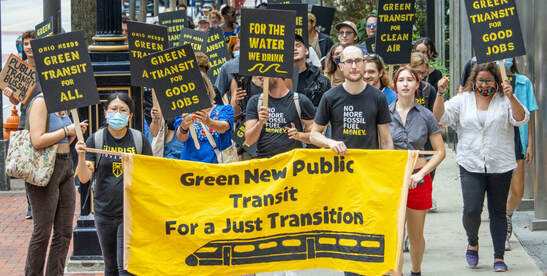 Paul Becker, CC BY 2.0
THE CLIMATE CRISIS
The threat of climate change is no longer in the misty future.  In 2017, in the U.S., we experienced devastating hurricanes and fires – events that climate scientists have been predicting would become more ordinary.  Feedback loops are leading to unlimited further warming.  *For example, as warmer temperatures melt glaciers, dark oceans increase in size, resulting in more absorption of the sun's heat and increases in global warming which results in more glacial melt. The consensus of virtually all climate scientists is that we must now make an abrupt shift away from fossil fuels to avoid catastrophic climate change.

CLIMATE CHANGE IS A WORKING CLASS ISSUE
Thousands of workers have lost jobs and homes after hurricanes in New Orleans, Orlando, and Houston and fires in California. Two hundred thousand Puerto Ricans were forced off the island because of Hurricane Maria.  Low income and people of color communities are particularly vulnerable to extreme weather events because of poor quality housing, precarious employment, and environmental injustice - living near toxic spills, chemical plants, and oil and gas refineries.  Climate change negatively affects the health of workers (first responders, farmworkers, letter carriers, construction workers, factory workers) who deal with triple degree heat and smoke-filled air.  In California alone, it's projected that in 2025 rising average temperatures will result in 2,100 - 4,300 deaths.  And this is just the beginning.

A JUST TRANSITION IS POSSIBLE
We can create a just transition that that rapidly gets us off of fossil fuels, while at the same time supporting good jobs, social and racial justice, economic equity and healthy, vibrant communities.
We need an immediate 21st Century Climate Jobs program that prioritizes jobs for low income people and people of color; and provides for a just transition for displaced fossil fuel workers.  These jobs would be in energy and materials efficiency, alternative energy, public transportation, electric vehicle production, and creating climate resilient communities.
We have the technology.  Stanford University scientists have developed a peer reviewed 50-state roadmap for transitioning the U.S. from dependence on fossil fuels to 100% renewable energy by 2055. (1)
Important studies demonstrate the relatively low cost of investment in creating jobs that will protect the planet.  The Center for American Progress report finds that private plus public investment of $200 billion per year would allow U.S. carbon emissions to fall by 40% within 20 years. (2) Private investment is good, but it is likely to fall far too short of what we need.
We need a public program of climate jobs organized with the speed and commitment of the U. S. mobilization for WW II.  Even if this public investment were $300 billion per year (as physics demands) it would be modest when compared to the nearly $1.1 trillion national security budget for 2018. (3)
(1) "Stanford Scientist Unveils 50-state plan to transform the U.S. to Renewable Energy", Mark Schwartz, Stanford News, Feb. 26, 2014
(2) "A Just Transition for U.S. Fossil Fuel Workers", Robert Pollin and Brian Callaci, American Prospect, July 6, 2016
(3)"The Hidden Costs of National Security: Ten Ways Your Tax Dollars Pay for Wars, Past, Present and Future" , Common Dreams, William Hartung, July 25, 2017

CHALLENGES
Government policy has favored the fossil fuel industry with over $20 billion a year in federal and state subsidies and timid policies in dealing with the climate.  Now the current Federal Administration is going 180 degrees in the wrong direction by ensuring that huge fossil fuel projects move full speed ahead, while attacking the Clean Power Act, and slashing budgets and subsidies for renewable energy.  Shifting what is politically possible so we can achieve an equitable 21st Century climate jobs program is the significant challenge we face.
To meet this challenge, Climate Jobs PDX organizes with other groups around local and state initiatives and actions that will create climate jobs and highlight the critical need to address the climate crisis.  These include Oregon's Community Solar Program, the Portland Clean Energy Fund, the Green New Deal and the Climate Strike (September 20-27 2019). In addition, these efforts will build the confidence and the grassroots constituency to reach further.  We bring issues and projects relating to climate change and climate jobs to unions and other groups with the vision of building the solidarity necessary to achieve a just transition.

​CLIMATE JOBS STATEMENT ON SEVERAL CURRENT CRISES
Climate Jobs PDX joins organizations in the climate movement to condemn the ongoing police violence against African Americans, Indigenous people, all people of color and all the people demonstrating against these atrocities.
We see an unprecedented array of crises facing the people of our country and for that matter the people of the world.  These include: 1) the wide spread violence toward oppressed people from Minneapolis to Gaza to the Amazon, 2) the pandemic which attacks all people but low income communities and people of color more,  3) the massive unemployment all over the world because of the collapse of the neo-liberal economies and 4) the on-going acceleration of the climate crisis which has a greater impact on communities of color, and accompanying effects of the burning of fossil fuels like increased forest fires, rising oceans and extreme weather events.
We are encouraged by the massive demonstrations against police violence and the political education that goes with it. Young people of color are the appropriate leaders of the movement. They are facing a dismal future dominated by all the results of carbon pollution and all the other crises just make it worse and harder to address.
Climate Jobs PDX proposes significant cuts in funding for police and military and using the money and personnel to implement a massive Green New Deal (GND) which would fund public services for emergencies, health and safety and reverse the climate crisis, and employ everyone who wants to work. Like the Portland Clean Energy Fund (PCEF) the GND proposes employing low income and people of color first in order to reverse historic economic inequality. We want our city to be a leader in this re-direction of funds from the police.
The most immediate challenge is to bring our police under control. Ban the militarization of our police, the use of chemical weapons and make police accountable for their behavior by reforming the contract with the Police Union. But we need to resist the temptation to relax and go home when we accomplish the reform of police and the criminal justice system. The situation demands that we continue to work on the other issues in a deep way.